You are here: Home / Fat / Why we should eat fat

When I talking about LCHF WOE to a friend, she said, ‘The reason we eat fat is because we must feel full, right?’ She was right, but there are 2 more reasons. That’s what this blog is about.

3 reasons why we must eat healthy fats

Satiety means ‘satisfaction’. The Oxford Learner’s Dictionary defines ‘satiety’ as ‘the state or feeling of being completely full of food, or of having had enough of something’.

Fat has the character of satiety. You cannot overeat fat. When we have sufficient fat in our low-carb food, we feel full sooner. Fat prevents us from over-eating. That’s why nature packs protein with fat like in eggs and meat. We are the ones that throw out the fat because we naively believed in the cholesterol hypothesis.

On the “low-cal, low-fat” eating pattern, we are all advised to stop eating when we are 3/4ths full. The ‘experts’ on low-call-low-fat say that by the time the signal is sent to the brain to stop eating, we would have overeaten. But in the LCHF WOE, we don’t need to do any such thing. As we are eating, when we are full, the signal will be sent to the brain that we are full, and we can stop eating.
Warning: Fat combined with refined and unhealthy carbs is easy to overeat, because the carbs interfere with leptin and insulin levels. That’s why it may be easy to overeat biriyani or doughnuts.

So, eating fat helps you get satisfied sooner and prevents you from overeating.

People get stuck on a weight loss plateau or diabetes reversal plateau when they eat too much protein. The reason that happens is: Glycogen is the storage form of carbs. When we eat carbs, the body converts it into glycogen, excess glycogen is stored as fat. But when we eat too much protein also, the body converts the excess protein into glycogen through a process called gluconeogenesis, and the body starts storing fat.
To prevent that from happening, it is necessary to eat sufficient amounts of fat and lower amounts of proteins. LCHF is not a high-protein diet, it’s high fat. When we combine fat with protein, we cannot overeat protein (I’ve mentioned that in the What to eat page and the Meals page). I added a tablespoon of butter for each meal for a month and reduced 2 kgs. (Refer to table at the bottom of our story page).

Please don’t think that the term ‘insulin’ has to do only with diabetics. Every human being has the hormone called ‘insulin’. Diabetics merely have an impairment in the functioning of insulin. 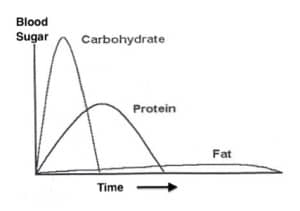 Role of insulin in making us fat:
Insulin is not only the “blood sugar regulating hormone” but also the “fat storage hormone”. The more insulin your body secretes or intakes (in the form of insulin injections), the fatter you will become.

So, eating fat is good because it has the least insulin response.

There are many other reasons why fat is beneficial. These are the main three reasons, and I hope they make sense to you. Shall write more about the other reasons later.